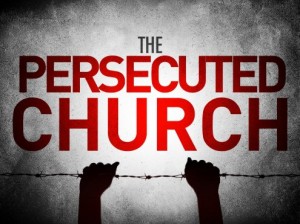 Let’s remember to continue praying for the persecuted church.  By some reports, there are 100,000 Christians martyred each year around the world.  This number does not include the many more number of Christians who are imprisoned because of their faith.

Here is a link to the Christianity Today article from July 3, 2014, that I referred to in Sunday’s sermon:

In Revelation 6:9-11, we are given a glimpse of heaven where the martyrs cry out to God for vindication.

When he opened the fifth seal, I saw under the altar the souls of those who had been slain because of the word of God and the testimony they had maintained.  They called out in a loud voice, “How long, Sovereign Lord, holy and true, until you judge the inhabitants of the earth and avenge our blood?”  Then each of them was given a white robe, and they were told to wait a little longer, until the number of their fellow servants and brothers who were to be killed as they had been was completed.

When Jesus returns, He will conquer all of His enemies and grant justice to His chosen ones.  In the meantime, we must endure injustice and persecution.  Let’s stand by our brothers and sisters who are suffering for the sake of Christ by praying for them on a regular basis.

For regular updates on the persecuted church, visit the Voice of the Martyrs at www.persecution.com.