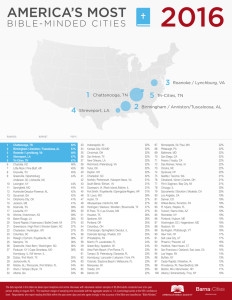 In the annual “Bible-Minded” cities report, Barna Group explores how Bible engagement plays out regionally in the United States. The study, based on interviews with 62,896 adults shows how people in the nation’s 100 largest media markets view and use the Bible.

What Is a Bible-Minded City?

Each year, in partnership with American Bible Society, the Barna group ranks the nation’s top media markets based on their level of Bible engagement. Individuals who report reading the Bible in a typical week and who strongly assert the Bible is accurate in the principles it teaches are considered to be Bible-minded. This definition captures action and attitude—those who both engage and esteem the Christian scriptures. The rankings thus reflect an overall openness or resistance to the Bible in various U.S. cities.

The Top Bible-Minded Cities in 2016

The Least Bible-Minded Cities in 2016

The bottom five cities are primarily in the Northeast or on the East Coast, with the exception of one in the Midwest. The least Bible-minded city in 2016—Albany/Schenectady/Troy, New York—moved up one spot from last year to claim the crown, with only 10 percent of residents qualifying as Bible-minded. Boston, Massachusetts (11%), moved from third to second place while Providence, Rhode Island (12%)—the least Bible-minded city in 2015—dropped two spots to third place. The only Midwest city to make the top five was Cedar Rapids, Iowa (13%), followed by Buffalo, New York (13%), to round out the list.

Where does Rochester rank?

I would encourage you to look over the visual report from Barna’s research. Click the link below to see the report.

Here are the findings related to cities near us.

So what does this mean for us?

While this report is based only on the people they called in the Rochester area (I am assuming you would have answered more Bible friendly), it still underscores the need for each of us as followers of Christ to maintain a consistent engagement with the Word of God. This includes things like reading the Bible, listening to it being taught, but it must also include implementing its contents into the fabric of our lives (homes, schools, jobs, etc.). Based on this survey, I would challenge you to ask yourself the following questions.

Outside of church activities, how Bible minded is your home?

Outside of Sunday morning, how Bible minded are you during the week?

Would the people closest to you describe you as being Bible minded?

The law of the Lord is perfect, refreshing the soul.

The statutes of the Lord are trustworthy, making wise the simple.

The precepts of the Lord are right, giving joy to the heart.

The commands of the Lord are radiant, giving light to the eyes.

The fear of the Lord is pure, enduring forever.

The decrees of the Lord are firm, and all of them are righteous.

They are more precious than gold, than much pure gold;

They are sweeter than honey, than honey from the honeycomb.

By them your servant is warned; in keeping them there is great reward.