When Someone Doesn’t Believe 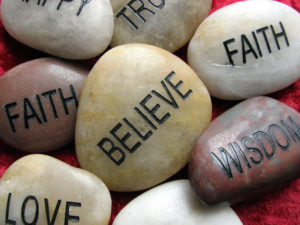 To a Follower of Christ, the most central component of who they are, their identity, is their faith in Christ.  It seems incomprehensible to separate the relationship we have with our Lord from our thoughts, conversations, or interactions with others.  Yet, we all have close friends or family members who simply do not believe as we do.  This leaves us at times in awkward situations in which our different worldviews come into conflict – and even sometimes hurt feelings.

These individuals are continually on our minds and our prayer go up for them.  I have such a friend from my childhood where I cannot go more than a few days without praying for him. Growing up, we would get into conversations about faith and he always seemed cold.  I tried reasoning and explaining, yet to this day he has no desire to have anything to do with God. So what do you do?

Be Ready
1 Peter 3:15 states, “But in your hearts revere Christ as Lord. Always be prepared to give an answer to everyone who asks you to give the reason for the hope that you have. But do this with gentleness and respect..” As Christians, we need to be prepared to give a reason for the faith that we believe in. We believe by faith; however, this faith is based on God revealing Himself throughout history as recorded in Scripture which has been preserved for us.  God has revealed Himself in the life of others and in ourselves as we testify to His goodness and grace.  Romans 1:19-21 reveals that God has used Creation to testify of His wondrous works done by His hands.  Romans 2:15 tells us that our own conscious reveals a higher moral law.

As well, Scripture reveals that the Holy Spirit can work immediately and also through a process.  In Luke Chapter 24, Jesus walks with two men down the Road to Emmaus and explains how Scripture speaks to His death, burial, and resurrection.  How Christ was the promise and fulfilled these events.  In Acts Chapter 8, Phillip spoke to the Ethiopian Eunuch of the Messiah through Isaiah 53.   Paul spoke and reasoned intellectually with the men on Mars Hill as they had a temple to the unknown God (Acts 17).

We as believers do have a responsibility to be prepared to give an account for the hope that is within us.  However, we must also recognize that it is not through our efforts, but through the work of the Holy Spirit in which an individual’s eyes are opened to the truth of the Gospel.

As a result, we need to be prepared, but not be combative.  We need to dialogue and not debate.  We cannot afford to win an argument, but lose the war.  I have also found that it is dangerous to get into prolonged discussions as the purpose is usually not to understand, but to entrap.  In these scenarios, there is often no answer that you could give that could satisfy.  Instead, you could approach the discussion stating that you are willing to answer their question; however, if you could give a reasonable answer would they be willing to consider the existence of God and have further conversation.  This will often reveal the heart of the conversation – whether it is true inquiry or attack.

I would recommend being ready by reviewing works by Ravi Zacharias, Timothy Keller, or Frank Turek.

Be Loving
A defining characteristic of who we are in Christ is our love – our love for our Heavenly Father and for others.  John 10:10 states, “By this everyone will know that you are my disciples, if you love one another.”  Everything that we do for God and for others is driven by a pure love and a rejection of self-centeredness.  Our actions speak loudly and show that we care.  If we tell others to come to Christ and speak of our relationship with Him, but are constantly backbiting, arguing and gossiping what does this say about our faith?  What does it say if we are unwilling to be there for others?  Or only thinking about what others can do for us?  If we are being divisive, critical, and constantly nit-picking?

Galatians Chapter 5 contrasts a life lived by the Spirit and one that is lived by the World.  We need not to state this in words, but actually live this out through our example.  If the world cannot attest to the love of those who follow Christ, no wonder they have difficulty seeing His presence in this world.  When we love as Christ loved and spoke as He spoke, this will draw others to see a powerful difference in that which we claim.

Be Patient
Though Christ is the only way to the Father through faith alone, He certainly seems to take us on different paths to get there!   Sometimes when the Gospel is shared to an individual for the first time, there is an immediate response. Other times, our Father is gradually working on their hearts.  This past week, I was challenged to look at the story of “Doubting Thomas” a little different.  After the resurrection, Jesus had appeared to the remaining disciples with Thomas being the only one not in attendance.  When he met up with the disciples, they quickly told them how Jesus was alive; however, Thomas doubted.  He couldn’t believe it.  Everything he knew about life and about death, told him that it was not possible. In John 20:25, he stated, ““Unless I see the nail marks in his hands, put my finger in the wounds left by the nails, and put my hand into his side, I won’t believe.”  And if you were there, could you blame him?

This is where I was challenged.  How would I have responded if I was one of the other disciples?  Would I have badgered Thomas?  Would I belittle him for his unbelief?  Would I chastise him?  Would I get into a long and heated argument about the Scriptural position of the Resurrection?  And who knows, maybe those things took place to some degree.  However, we know one thing.  The other disciples didn’t run Thomas off. Though it took eight more days, Christ did come back into their midst and when Thomas saw Christ he believed.

In John 20:29 Jesus responds to Thomas by stating, “Because you have seen me, you have believed; blessed are those who have not seen and yet have believed.”  In this statement, Jesus was speaking to all the Christians who came to know Him through the testimony of the Gospel.  Though they did not see Jesus physically, it is through the love, care, and actions of others that they came to know the truth and accept the free gift of salvation that God had in store for them.

Be urgent to display our Heavenly Father’s grace.  Be quick to share the words of Jesus’ love.  Be patient to wait on the Holy Spirit’s work.