Love Comes in Many Forms 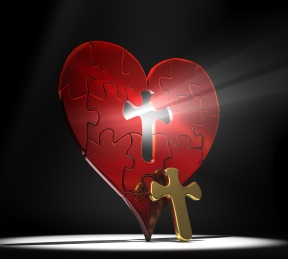 “But God demonstrates his own love for us in this: While we were still sinners, Christ died for us.” – Romans 5:8

Quick – you still have time! Valentine’s Day is only a few hours away!

I know over-commercialized…too sappy…too sentimental…an overt single’s awareness day…or better yet, do you actually know the historical significance of Valentine’s Day?

Before I go too far and get myself in trouble, I want to say that for me Valentine’s Day has more than one meaning. To me, Valentine’s Day is about the fact that love comes in so many forms.

First, I do have to say that I am that classic cliché guy that proposed to his girlfriend on Valentine’s Day. I took her to an overlook off the Blue Ridge Mountains in Virginia and swept down to one knee – fumbling through my pockets to find the ring. I stated my adoration and my enduring love to the one who I hoped would be my wife. (Long story short, she said “yes”)

This picture of love reminds me of Christ who presents His Church as a radiant bride, without stain or blemish. A challenge to care for my wife with upmost dignity and with a servant’s heart.

Second, last year on February 12th, my in-laws welcomed a sweet little boy from South Africa into their family and gave him a forever home. Abram was given a father, mother, sisters and brothers. He was given a new name and a new destiny. His life was forever changed!

This picture of love reminds me of our Heavenly Father who has adopted us into his family and has called us His children. A challenge to be forever grateful of God extending His hand of grace into my life.

Third, and perhaps the most touching to me, Valentine’s Day reminds me of a sacrifice which gave life. This is a little longer of a story, so please bear with me…

When I was in second grade my brother had a seemingly unexplained sickness that he just couldn’t shake. Eventually, my parents took him to the Medical College of Ohio where he was diagnosed with leukemia. It was a very hard time growing up as I saw my impenetrable oldest brother grow weak and frail. He went through chemo and radiation while, at the same time, seeing many of the children on his wing of the hospital pass away. The only procedure that the doctor’s had left was a bone marrow transplant. And actually, at one point he was so sick that the doctors told my dad that it may be best to start looking into hospice. They tested my middle brother and myself, but we did not match. They came so close and found a woman in France; however, she found out she was pregnant and could not be used as a donor. Hope was slipping away, and my brother was getting sicker and sicker.

To my family, Valentine’s Day is a very, very special day; it is when God gave my brother a miracle, the opportunity to live. (Even though he is permanently bald and has suffered hearing loss, he has been in remission since that time! And we praise God!)

This picture of love reminds me of the sacrifice that Christ gave on the cross for our sins and that He rose victoriously over death to give us life! A challenge to live my life fully for Him for the sacrifice that He gave and the debt that I can never repay.

Remember this Valentine’s Day that love can come in so many forms! Be challenged to live out the example of love in Christ Jesus our Lord!
“This is how God showed his love among us: He sent his one and only Son into the world that we might live through him. This is love: not that we loved God, but that he loved us and sent his Son as an atoning sacrifice for our sins. Dear friends, since God so loved us, we also ought to love one another.” – I John 4:9-11